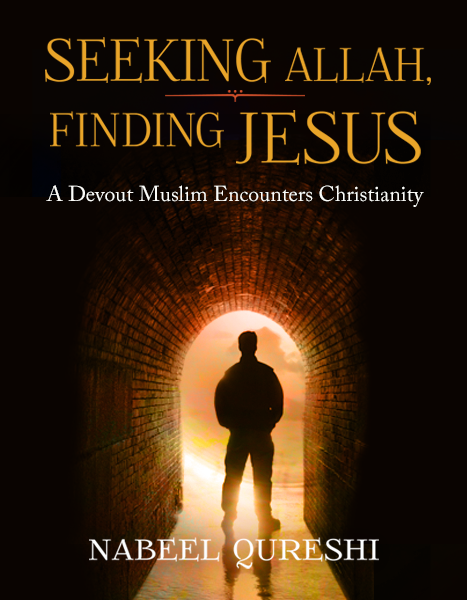 Nabeel Qureshi is a speaker and author with Ravi Zacharias International Ministries. He holds an MD from Eastern Virginia Medical School, an MA in Christian Apologetics from Biola University, and an MA in religion from Duke University.

Seeking Allah, Finding Jesus is Nabeel Qureshi's story of how he went from being a devout Muslim to a follower of Jesus Christ.

Qureshi begins by walking the reader through what it was like to grow up as a Muslim and the struggles that come along with it.  One of the many strengths of the book is that the reader immediately connects with Nabeel and his family on a personal level.  With all the fear surrounding Muslims in this day and age, [1] the family Nabeel grew up in was a tender one and their love is apparent and makes his story all the more gripping.  As Qureshi struggles to find answers to his questions about his dearly held Muslim faith, more than ever this reader understood and appreciated the impact of making the decision to follow Jesus can have on the individual Muslim and his loved ones.

As the author begins defending his Muslim convictions and investigating the truthfulness of the Christian worldview, we see the impact both uninformed and informed Christians can have on the unbeliever.  Moreover, the author goes to great lengths in detailing his investigation and the key stages of his journey.  This makes the book a compelling read that is difficult to put down!

Throughout the book the reader is treated to a thorough education of Islam and the various sects therein.  This reviewer was also surprised to learn the difference between Eastern Muslim thought and Western thought when it comes to the issue of authority.  As Qureshi writes:

"People from Eastern Islamic cultures generally assess truth through lines of authority, not individual reasoning.  Of course, individuals do engage in critical reasoning in the East, but on average, it is relatively less valued and less prevalent than in the West.  Leaders have done the critical reasoning, and leaders know best.  Receiving input from multiple sources and then critically examining the data to distill a truth is an exercise for specialists, not the common man." [p. 79]

This proved to be a hurdle that the author had to jump before he was able to properly investigate the questions of Jesus' deity and the historicity of His resurrection from the dead.  This reviewer was very impressed with the author's ability to effortlessly weave issues of historical methodology and philosophical argumentation, such as inference to the best explanation, into his personal narrative.

Arguments and questions dealt with in the book are many:

One of the many instructive points of the book for this reader was when the author explained why one cannot assume that the Quran is the Islamic equivalent to the Bible.  Qureshi writes:

"If you can imagine God's mystery and wisdom, His power, depth, and perfection, His divine mandates and prophecies, all synergistically inhabiting the physical pages of a book, vivifying it with the very essence of God, you will begin to understand how and why Muslims revere the Quran...For Muslims, the Quran is the closet thing to an incarnation of Allah, and it is the very best proof they provide to demonstrate the truth of Islam.  The best parallel in Christianity is Jesus himself, the Word made flesh, and his resurrection.  That is how central the Quran is to Islamic theology." [p. 228]

Throughout Nabeel's story the importance of apologetics is powerfully illustrated.  The author explains how most Christians he would meet in the West were completely ill-equipped to respond to his claims about Islam and his challenges to Christianity.  He writes:

"Regarding Muhammad, Westerners rarely knew anything.  I could say whatever I wanted about him and others would believe me.  Of course, I did not try to deceive anyone, but it was not hard to make a case for Muhammad to the average Christian, simply because of their ignorance." [p. 84]

He explains that each time he was able to successfully defend his Islamic convictions, and the Christians he met were unable to challenge him, it bolstered his faith.  This should give the thoughtful Christian pause and deepen our desire to "always be ready to make a defense to everyone who asks you to give an account for the hope that is in you, yet with gentleness and reverence" (1 Peter 3:15).

By contrast, we also see the powerful role a few Christians played in the author's life when they had convincing answers to his questions and spent time with him.  Qureshi also notes the vital part that apologetics played in his investigation of just who God is:

"...I realized the value of apologetics and what the arguments had done for me.  All my life, barriers had been erected that kept me from humbly approaching God and asking Him to reveal Himself to me.  The arguments and apologetics tore down those barriers, positioning me to make a decision to pursue God or not...The work of my intellect was done.  It had opened the way to His altar, but I had to decide whether I would approach it" [p. 249-250]

Simply put, Seeking Allah, Finding Jesus: A Devout Muslim Encounters Christianity is one of the best books I have ever read.  As I worked through the book I couldn't help feeling like I was walking with Qureshi through his investigation and when he celebrated, so did I.  When he wept, my heart ached for him and his family.

This book goes far beyond educating about Islam.  This reviewer was pleasantly surprised by the broad range of topics covered in regard to the differences between Islam and Christianity, the correct methodology in investigating historical questions, and the relationship between faith and reason.

I cannot recommend this book highly enough.  If you are a Muslim that has questions about Christianity, I cannot think of a better book for you to start with.  If you are a Christian who has questions about Islam or desires to reach Muslims with the Gospel, get this book and master the content.  But beware.  Once you start it, you won't be able to put it down!  Just ask my wife!

Footnote:
1. I sympathize with this anxiety and do not believe it is without merit.
Posted by Chad at 6:00 AM