"Taking the Roof Off" with Homer Simpson 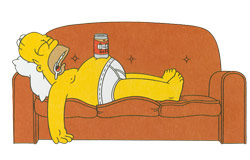 When I became a follower of Jesus Christ, I had no idea that I would be having so many interesting conversations with so many different types of people with various beliefs.

After becoming a Christian, I had dinner with a friend of mine and his girlfriend.  They were both well aware of my recent decision to follow Christ and during the meal his girlfriend looked at me and said, "Can I ask you a question?"  I replied, "Sure."  She said, "How do you know that he (Jesus) is the one?"  I proceeded to share with her some of the evidence that had helped me conclude that Jesus was the Son of God and that He rose from the dead.  She seemed interested.  Then, I looked at her and said, "May I ask you a question?" She answered, "Yes."  I asked, "What do you believe about God?"  She thought about it for a moment and said, "I guess I think that whatever you believe, that is what happens to you after you die."  I found this fascinating.

The restaurant we were sitting in was in a mall and across from the restaurant was an FYE entertainment store.  In their window display they featured large cardboard stand-ups of popular movie characters and cartoons characters.  I looked up and saw Homer Simpson and had a thought.  I looked at the young lady again and said, "So on your view, if I sincerely believe that Homer Simpson is god and that when I die I will go to Springfield and worship him forever, that is what will happen to me?"  She paused for a moment, giggled a bit and replied, "Yeah...I guess...I guess that sounds kinda stupid..."  I assured her that I was not trying to make her feel foolish, but that I was only trying to understand her view better.

The tactic I used in this conversation is called, "Taking the Roof Off."  According to Greg Koukl, "First, adopt the other person's viewpoint for the sake of argument.  Next, give his idea a test drive.  Try to determine where you will end up if you follow his instructions faithfully.  If you arrive at an odd destination, point it out and invite the person to reconsider his starting point." [1]

This is a great tactic to have in your evangelist tool belt.

If you are interested in learning more tactics like the one above, I highly recommend Koukl's book Tactics: A Game Plan for Discussing Your Christian Convictions.  Our review is here.

Greg Koukl got the phrase "taking the roof off" from Francis Schaeffer, who learned the idea of reducing your opponent's position to absurdity from his apologetics professor at Westminster Seminary, who was Cornelius Van Til.