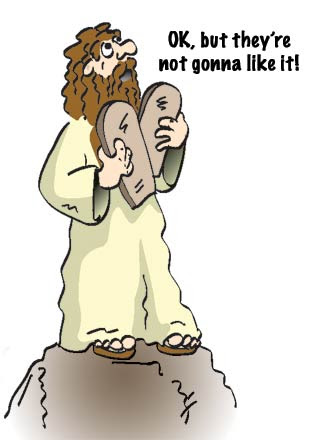 The idea of a Moral Law is impressed into mankind. For example, we know that love is superior to hate. We applaud and revere those who work to save lives, feed the poor, or care for the sick. Try to imagine a world were those celebrated were the ones that murdered others in cold blood, starved the poor, or discarded the sick.

Or, as C.S. Lewis wrote in his classic work Mere Christianity:

"Think of a country where people were admired for running away in battle, or where a man felt proud of double-crossing all the people who had been kindest to him. You might just as well try to imagine a country where two and two made five." [1]

This past week I had the pleasure of attending Dr. Frank Turek's I Don't Have Enough Faith to be an Atheist seminar held at Hood College in Frederick, Md.

During Turek's first lecture he showed a short video entitled "Cruel Logic" to illustrate the reality of objective moral laws.

I encourage our readers and team members to view the video and share your thoughts and reactions.

You can view the video on Dr. Turek's blog found here. Please note that the video is a bit intense.

Here are a few questions to consider before, during, and after watching the video:

2) What would be the consequences of a universal acceptance that morality is simply a product of our DNA?

To research the Moral Argument for God's existence more, visit the following links:

1) The Moral Argument by Phil Fernandas

2) The Indispensability of Theological Meta-Ethical Foundations for Morality by Dr. William Lane Craig

3) Why So Serious?- The Moral Argument for God's Existence by Chad A. Gross

Great point! Thank you for adding that! Hopefully, I didn't confuse that in the post.

Very good video and topic! I think that one consequence of a universal acceptance that morality is simply a product of our DNA would be the fact that we would be denying that there is a God. How would the courts punish people if there crime was committed because of their DNA. We would be saying that well I guess I was born the way I am, and I'm going to ultimately do whatever my DNA has for me to do. This would just be another excuse for our sin.

How are you doing?

It would indeed be more difficult to justify punishing somebody for a crime if they were merely acting out of what was already encoded into their DNA. If there is no God, how can we say that this person is/was wrong? If God does not exist, then man is no more important than a rat; words like "right" and "wrong" become subjective opinions that vary from person to person.

However, the video shows that when push comes to shove, we do know what is truly right and truly wrong.

This is a good example of putting world views to the test. To put the view to the test, take the view and see how it plays out in reality.

In this case, the view is that DNA determines behavior. The video puts that view to the test by showing the viewer how it would play out in reality if we really treated that view as if it were true. Of course, no one is willing to live with that in the real world. The practical application of the belief is absurd. This is called reduction to absurdity (reductio ad absurdum).

Someone has been reading there William Lane Craig! :-) Just kidding! That was very "Craig-ish," no? Next time, please include a name that requires you to spit when saying it out loud…:-)

Taking that a step further, for an atheist to even object to killing, cheating, and lying, etc., they have to borrow morality from the theistic worldview.

As Frank Turek has said, "The atheist has to sit in God's lap in order to slap his face!"

"Taking that a step further, for an atheist to even object to killing, cheating, and lying, etc., they have to borrow morality from the theistic worldview."

I think an atheist can object to something, but only on the grounds that they personally do not like said action, and not because its anymore "evil" than wearing white after Labor Day in the grand scheme of things.

Kinda like how my grandpa's dog used to personally get upset when anyone touched the welcome mat.

Now, when they say things like "rape/murder/stealing is a universal evil and always will be" is when they start sounding absurd, as such things as true universal morals cannot even exist in their worldview.

In a purely naturalistic world, right and wrong are merely determined by the majority of that society's opinion. This would mean that for the ancient Spartans, it was morally good to throw children off of cliffs or leave them to die if they thought they were weak for whatever reason since that is what the majority of the population thought.

Interestingly, very few atheists will admit this, and will state the Spartans were wrong, and that it is always wrong to kill children for such reasons.

Thank you for visiting the blog and apologize for taking so long to respond!

You raise some excellent points. You wrote:

"Interestingly, very few atheists will admit this, and will state the Spartans were wrong, and that it is always wrong to kill children for such reasons."

I have found this to be true myself, however, it certainly begs the question, no? The question being, "Why is it wrong?"

Thanks for the thoughtful points!

Well, if God exists, then it is wrong because it goes against his unchanging will, and his authority is higher than any human's.

To be honest I'm not a very religious/spiritual person, but that's just how I've always seen it. :p

I appreciate your honesty and please know that folks of all beliefs and backgrounds are welcomed here.

May I ask you a question? Do you believe objective moral standards exist?

Thanks again for visiting the blog and taking your time to comment.

A better question, Do you like to experience pain and suffering?