How Many Angels Were at Christ's Tomb? 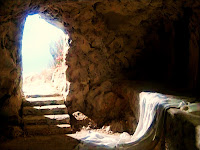 Another supposed Bible contradiction skeptics commonly offer is the question of how many angels were at the tomb of Jesus after Jesus's resurrection.

In his gospel, Matthew only refers to one angel.  He writes:

"But the angel told the women, 'Don't be afraid, because I know you are looking for Jesus who was crucified."1

However, regarding the same event, John writes in his gospel:

"She saw two angels in white sitting there, one at the head and and one at the feet, where Jesus' body had been lying."2

So, was there one angel or two angels at the tomb that first Easter morning?  Or is this clearly a contradiction.

As Norman Geisler and Randy Douglass explain, it is all a matter of perspective:

"Just because two or more accounts of the same event differ, they are not necessarily mutually exclusive.  The reports in these passages are not contradictory.  We have already learned the infallible mathematical rule that explains this problem: wherever there are two, there is always one.  Matthew did not say there was only one angel.  He probably focused on the angel who spoke while John referred to how many angels they saw.  One has to add the word 'only' to Matthew's account to make it contradict John's.  Once again, the problem is now with the what the Bible actually says, but with the critic who adds to it."3

How did Judas Iscariot Die?

What about the Differences in the Resurrection Accounts?