How We Got the Bible by Neil R. Lightfoot 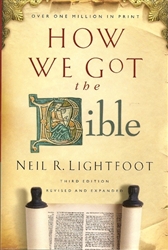 The late Dr. Lightfoot served as Frank and Della Pack Distinguished Professor of New Testament at Abilene Christian University. He wrote that we know the following regarding early writing:


He went on to write:

Such information as this has important implications for the origin of our Bible, for skeptical Bible critics formerly held that writing was unknown in the days of Moses and therefore that Moses could not have been the author of the first five books of the Bible. We now know that writing was practiced many centuries before Moses and that an alphabetic script was in use in the vicinity of Sinai. Indeed, at least five different systems of writing are known to have existed in the general area of Syria-Palestine when Moses lived. All of this means it can no longer be assumed that it was impossible for Moses to have written the books ascribed to him.(1)

I just started making my way through this book, so expect to see additional posts gleaning from it in the future.