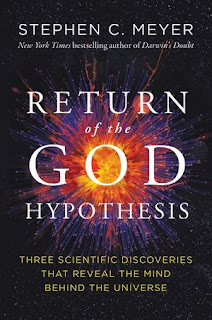 Stephen C. Meyer received his Ph.D. in the philosophy of science from the University of Cambridge. A former geophysicist and college professor, he now directs Discovery Institute’s Center for Science and Culture in Seattle. He has authored the New York Times best seller Darwin’s Doubt: The Explosive Origin of Animal Life and the Case for Intelligent Design (HarperOne, 2013), Signature in the Cell: DNA and the Evidence for Intelligent Design (HarperOne, 2009), which was named a Book of the Year by the Times (of London) Literary Supplement in 2009, and now, The Return of the God Hypothesis (HarperOne, 2021).

The New York Times bestselling author of Darwin’s Doubt and Intelligent Design scholar presents groundbreaking scientific evidence of the existence of God, based on breakthroughs in physics, cosmology, and biology.

In 2004, Stephen C. Meyer, one of the preeminent scientists studying the origins of life, ignited a firestorm of media and scientific controversy when a biology journal at the Smithsonian Institution published his peer-reviewed article advancing the theory of Intelligent Design. Then, in his two bestselling books, Signature in the Cell and Darwin’s Doubt, he helped unravel a mystery that Charles Darwin did not address: how did life begin? and offered further scientific proof to bolster his arguments on the history of life and our origins, concluding that life was designed.

In those previous books, Meyer purposely refrained from attempting to answer questions about “who” might have designed life. Now, in The Return of the God Hypothesis, he brings his ideas full circle, providing a reasoned and evidence-based answer to the ultimate mystery of the universe, drawn from recent scientific discoveries in physics, cosmology, and biology.

Meyer uses three scientific points to refute popular arguments put forward by the “New Atheists” against the existence of God:

What is Intelligent Design? by Dr. Stephen C. Meyer

Video: Theistic Evolution by Stephen Meyer
Posted by Chad at 7:00 AM

I don't get it. I thought the thing about Intelligent Design was that you don't try to identify the Designer. If you say that the Designer is Yahweh, now you're into Creationism.

Did he mean to do that?? What happened to all the "Oh, no--this isn't Creationism. This is totally kosher for public schools, because the identity of the Designer is unspecified"?

First off, you asked in your other comment if I reject comments from atheists. Surely not! I have published all of your comments in the past that I have received...well, except the one about publishing atheist comments! Ha! But I am addressing it here. Further, I confess that I don't always remember to check the comments, so I will try to do better with that. Thank you for keeping me on my toes!

Anyway, I think your question is a good one. And while I certainly can't speak for Dr. Meyer, I will share my opinion. But please know, it is just that - MY OPINION!

You are absolutely right. ID theorists are very clear that they only strive to detect design. Who or what did the designing, they contend, is left to the theologians and the philosophers. However, in this particular work, as it says above:

"In those previous books, Meyer purposely refrained from attempting to answer questions about “who” might have designed life. Now, in The Return of the God Hypothesis, he brings his ideas full circle, providing a reasoned and evidence-based answer to the ultimate mystery of the universe, drawn from recent scientific discoveries in physics, cosmology, and biology."

So, the way I understood this is that in this particular book, Dr. Meyer will now be stepping away from strict ID and moving more into the realms of theology and philosophy.

I hope that helps and please keep commenting!