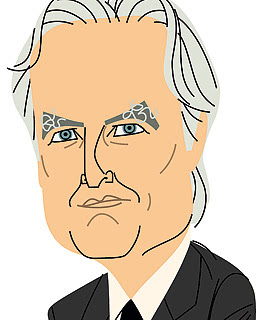 Biologist and neo-atheist Richard Dawkins is brilliant when it comes to misrepresenting the Christian position. Dawkins many times presents the Christian worldview in a light that most likely is not even recognizable to the educated Christian.

One such case with Mr. Dawkins is his complete and utter failure to understand the meaning of Biblical faith.

"Faith is the great cop-out, the great excuse to evade the need to think and evaluate evidence. Faith is belief in spite of, even perhaps because of, the lack of evidence."(1)

Really? Perhaps if Mr. Dawkins were to actually investigate the matter, he would find that the Greek word for faith is pistis, which means "evidence" or "moral conviction." It is derived from the primary verb pietho, which means "to convince by argument" or "to assent to the evidence."
The Biblical concept of faith is that it is reasonable and rational. Biblical faith is and should be grounded in reality. It is open to discussion, objective inquiry, and critique.

Richard Dawkins and his zeal for preaching his atheism is to be admired. However, his knowledge of the Bible and it's history is not.

It does indeed bother me that Dawkins and his fellow atheist typically fail to research what it is they are arguing against. I realize Christians make this mistake as well and fail to read the other side before making a case against it becuase we know it is wrong. I'm trying now to read and research well before creating an apologetic directed to a certain way of thinking or belief system. I'm glad your keeping informed about the current ebb and flow of our culture.

Thank you for visiting the blog. Truthbomb is still new so it's great to have fresh readers.

I'm glad to see you agree regarding Dawkins and his fellow atheists. I would just like to see them sincerely approach the strong arguments put forth by theists head-on instead of calling names and saying something like, "There is no evidence..."

You are very correct in pointing out that many Christians fail to study both sides of the argument. I believe there are various reasons for this (See No Fear; Christians, Apathy, and Apologetics articles), however, if what we believe is really true it should hold-up to inquiry. Time and time again I find that Christianity does that very thing!

Please contact me and let me know when you get your apologetics underway. I believe you are VERY wise to study and prepare before you feel you are ready.

I pray all is well!

E-mail sometime and let me know how things are going at FCF!

It is a big problem. On a daily basis I write to atheists (most of whom are swearing at me or calling me a "religitard") and try to explain to them that there is a way to debate issues without being disrespectful on either side but im always met with the childish response of "you first". Very well but its difficult to be respectful of someone who is calling God any number of expletives i wont repeat here and insisting that religion is the reason for social decay. Im open to learning but i daresay that argument is meritless. If someone commits a horriable act and then says "God told me to" its just fuel for the atheist fire even though any Christian would tell you this person is NOT representative of the Christian faith nor would anyone with any moral fiber agree that it was done in Gods name so its permissable. I,for one,am very tired of that argument.