Bertrand Russell and a Universe without God 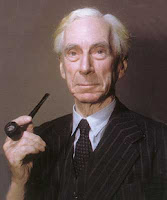 Many of the so-called "New Atheists" proudly proclaim the virtues of atheism and assert that humanity would be better off if they broke free from the shackles of belief in God.  As philosopher Ed Feser pointed out in a recent piece on his blog, the New Atheists "seem in general more inclined toward delusional happy-talk of the kind indulged in by Richard Dawkins when he opined that a world without religion could be “paradise on earth… a world ruled by enlightened rationality… a much better chance of no more war… less hatred… less waste of time.”1

Feser goes on to argue that "Old Atheists" such as Friedrich Nietzsche were under not such delusions and well understood the consequences should humanity no longer believe in God.

Feser's piece brought to mind the famous unbeliever Bertrand Russell who was very honest about how one should view the world if God does not exist.  Russell wrote:

"Even more purposeless, more void of meaning, is the world, which Science presents for our belief.  Amid such a world, if anywhere, our ideals henceforward must find a home.  That Man is the product of causes which had no prevision of the end they were achieving; his origin, his growth, his hopes and fears, his loves and his beliefs, are but the outcome of accidental collocations of atoms...destined to extinction in the vast death of the solar system, and that the whole temple of Man's achievement must inevitably be buried beneath the debris of a universe in ruins...Only within the scaffolding of these truths, only on the firm foundation of unyielding despair, can the soul's habitation henceforth be safely built."2

Nietzsche and Russell understood that if God does not exist, we have no ultimate significance, value, or purpose 3 and they were honest enough to admit it.

Footnotes:
1. Ed Feser, "Adventures in Old Atheism Part I- Nietzsche," June 13, 2016.
2. Bertrand Russell, Mysticism and Logic as quoted by Mary Poplin in Is Reality Secular?, p. 45.
3. For those who want to learn more, please see William Lane Craig's article "The Absurdity of Life Without God" here.