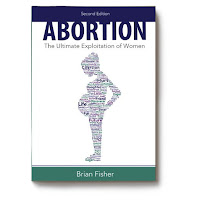 He started his career in Christian talk radio, and then served as Executive Vice President of a start-up financial firm. That firm grew to over $1.1B in assets before it was sold to an international banking organization.

Brian then served as president of a $38M dollar media non-profit before moving to Texas to become the COO of a large marketing agency. Brian moved back into the non-profit world as President of Human Coalition in early 2012 when it blossomed into the national effort it is today.

Brian is a Certified Financial Planner® and the author of four books (including the new release, Deliver Us From Abortion: Awakening the Church to End the Killing of America’s Children) and numerous articles. His columns have appeared in publications such as FoxNews.com, the Washington Post, Crosswalk, and CBN.com. Brian and his wife, Jessica, have two sons.

After over forty years of protest and debate, we all know one thing for certain about abortion: it’s a women’s issue, right?

Wrong, says Brian Fisher in his groundbreaking, updated and expanded book Abortion: The Ultimate Exploitation of Women. This second edition of Brian Fisher’s internationally-acclaimed treatise on men and abortion reveals long-forgotten or never-known facts to show that abortion is very much a man’s concern.

Fisher shows that a select group of compassionate men led the way in the nineteenth century to pass laws strengthening the criminalization of abortion—and worked with feminists of that era to do so. But it was men, not women, who drove the campaign that led to the 1973 Supreme Court ruling giving women an unqualified right to end the lives of their unborn children.

So what’s in it for men? As feminist legal scholar Catharine MacKinnon observes, abortion “does not liberate women; it frees male sexual aggression.” Abortion is the ultimate get-out-of-jail-free card for men with non-committal sex lives. Another agenda is at work as well. Men use abortion to advance their racist, eugenic, and population control dreams and schemes, as Fisher shows, citing their own words.

Supported by over one hundred new sources, augmenting hundreds from the first edition, Fisher argues that men have not only a right but also an intrinsic duty to end the abortion holocaust they started -- and they are.

Fisher outlines why and how, and he urges men to take up the task with courageous women. He lays out a five-point plan for men to “with humility, faithfulness, and relentless perseverance, commit our time, resources, energy, heart, and testimony to ending abortion in America for the sake of children, women, men, and the family.”

You can pre-order your copy here.

Brian Fisher on the Federal Government and Abortion

When Pro-Abortion Choice Rhetoric Hurts
Posted by Chad at 6:00 AM