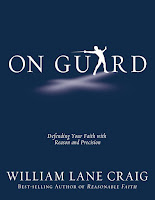 "The current debate over fine-tuning has now become a debate over the many worlds hypothesis.  In order to explain fine-tuning we're being asked to believe not merely that there are other unobservable universes, but that there is an infinite number of such worlds and that they randomly vary in their fundamental constants and quantities.  All this is needed to guarantee that a life-permitting universe like ours will appear by chance in the ensemble.  The many worlds hypothesis is really a sort of backhanded compliment to the design hypothesis.  For otherwise sober scientists would not be flocking to adopt so speculative and extravagant a view as the many worlds  hypothesis unless they felt absolutely compelled to.  So if someone says to you, 'The fine-tuning could have happened by chance!' or 'The improbable happens!' or 'It was just dumb luck!' ask him, 'Then why do the detractors of design feel compelled to embrace an extravagance like the many worlds hypothesis in order to avoid design?'"1

For those unfamiliar with the Design Argument, go here.

How a Dice Can Show that God Exists? by Justin Brierley

Article: Can Multiverse Theories Explain the Appearance of Fine Tuning in the Universe? by J. Warner Wallace
Posted by Chad at 6:00 AM

"Then why do the detractors of design feel compelled to embrace an extravagance like the many worlds hypothesis in order to avoid design?"

The Multiverse is predicted by Inflation, and Inflation has much evidence pointing to it.

Bob, To often people respond with some vague reference to a storehouse of evidence that might put the matter to rest, but then fail to provide it. I was wondering if you could provide this evidence that you mentioned and perhaps demonstrate how it's producing these supposed universes? Thanks.