Just How Big was Goliath? 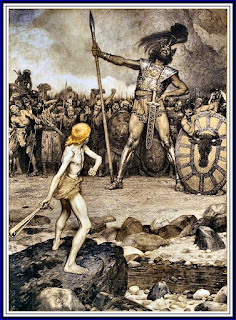 Of all the accounts recorded in the Old Testament, without a doubt one of the most beloved is David's titanic clash with the Philistine giant Goliath recorded in 1 Samuel 17.

The text records of Goliath:
"And a champion went out from the camp of the Philistines, named Goliath, from Gath, whose height was six cubits and a span.  So, just how big was Goliath?  The Chronological Study Bible explains:
"The height reported for the Philistine Goliath, 'six cubits and a span' (1 Sam. 17:4), indicates a very big man: approximately 9 feet, 9 inches tall.  If such a height seems tall now, it was much taller in ancient times.  Biblical people averaged about 5 feet in height, judging from skeletons uncovered by archaeologists.

Other Old Testament sources offer a different measurement for Goliath's height.  Some manuscripts of the Septuagint (the Greek Old Testament) and one of the Samuel manuscripts from the Dead Sea Scrolls read 'four cubits and a span' in 1 Sam. 17:4.  This height-about 6 feet, 9 inches-would still make Goliath a giant for David's time.  It is difficult to know what caused the differing numbers of six cubits (9 feet) and four cubits (6 feet).
Some scholars have noticed a possible explanation in the Hebrew text.  The Hebrew words for 'six hundred' (17:7), a few lines below the 'six cubits' line, look very similar to the Hebrew words for 'six cubits.'  They suppose that the eye of an early copyist accidentally caught sight of 'six hundred,' and the similarity of those words in Hebrew caused him to write 'six' instead of 'four' with 'cubits.'  In this way, 'six cubits' may have replaced 'four cubits,' making Goliath appear to be 9 feet, 9 inches tall, when he was still a giant at 6 feet, 9 inches.
It cannot be know which of these manuscripts preserves the original number.  Nevertheless, the youth David (1 Sam. 17:33) faced an opponent who, at either height, was truly a giant among warriors of his day."1
So, whether 6 feet or 9 feet, Goliath was a big dude!
Courage and Godspeed,
Chad
Footnote:
1. Chronological Study Bible, How Big Is a Giant?, p. 313.
Related Posts

Ted Wright on the Old Testament and Archaeology

Article: Is the Old Testament Reliable? by Chad A. Gross

A Great Witness to the Canonicity of the Old Testament Books