Why So Serious?- The Moral Argument for God's Existence 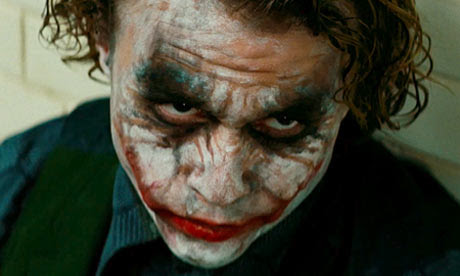 If the first 2 points can be verified, then the 3rd logically follows. Obviously, every law has a law giver. For a law to even exist or be discussed it had to have been created. There can be no legislation unless there's a legislature. [1]

However, is it reasonable to believe that a true absolute Moral Law exists? I submit that it is and that to believe otherwise could result, and has resulted, in morally reprehensible consequences.

The idea of a Moral Law is impressed into mankind. For example, we know that love is superior to hate. We applaud and revere those who work to save lives, feed the poor, or care for the sick. Try to imagine a world were those celebrated were the ones that murdered others in cold blood, starved the poor, or discarded the sick. Or, as C.S. Lewis wrote in his classic work Mere Christianity:

"Think of a country where people were admired for running away in battle, or where a man felt proud of double-crossing all the people who had been kindest to him. You might just as well try to imagine a country where two and two made five." [2]

I believe that the late Health Ledger's performance as the Joker in the film The Dark Knight gives us a hint of what a life could look like if one truly adopted the idea that no Moral Law exists.

Ledger's performance is eerie, unnerving, and brilliant. The Joker, most likely the number one comic book villain of all time, fully embraces the idea of anarchy and chaos. He concedes as much:

"The only sensible way to live in this world is without rules."

As a result, the Joker leaves a wake of destruction, murder, and social disorder wherever he goes and views his existence as a kind of giant social experiment. He himself states, "You'll see, I'll show you, that when the chips are down, these uh... civilized people, they'll eat each other."

The scary thing about the Joker's philosophy of "living without rules" is that if there is no God, no one would be justified in claiming whether or not he is right or wrong. If there is no objective, transcendent source of the Moral Law in which we can look to as our moral compass, isn't "living in the world without rules" okay? If not, why? Or, how do we know?

As Francis Schaeffer rightly points out, a world with no moral absolutes leads to confusion and an inevitable moral vacuum:

“If there is no absolute beyond man’s ideas, then there is no final appeal to judge between individuals and groups whose moral judgments conflict. We are merely left with conflicting opinions.” (4)

For those who would deny that an objective moral standard exists, one only needs to treat them poorly and watch their reaction! However, I do not recommend this, but only mention it to bring about a point.

The non-believer may object by stating, "One doesn't have to believe in God to live a moral life!" I could not agree more! The Apostle Paul tells us the reason a nonbeliever can live a moral life:

"So, when Gentiles, who do not have the law, instinctively do what the law demands, they are a law to themselves even though they do not have the law. They show that the work of the law is written on their hearts. Their consciences testify in support of this, and their competing thoughts either accuse or excuse them..." (Romans 2:14-15, CSB).

Atheists cast aside the very foundation of goodness-God, who created them and who is the highest Good. [5]

The problem for the nonbeliever is that they have nothing in which to solidify why they believe love is better than hate. Or why saving a life is better than taking one in cold blood. Their conscience simple is and their atheistic worldview cannot explain where the feelings come from, why they exist, or if they even matter. Logically then, the question must be asked: "If we are not morally responsible to a Creator, why choose the better virtue?" If killing someone gets one to where they want to be and the guilt they feel afterward is simply a feeling brought about by naturalistic causes, then why not just dismiss those feelings? If you can avoid being penalized by the existing law system, why not "introduce a little chaos," as the Joker recommends?

The reader at this point maybe wondering, "Does this guy realize that The Dark Knight is based upon a fictional work and that the Joker isn't a real person?" Of course I do, however, I believe the films focal character offers insight into what a life could look like (minus the make-up and the funny suit!) if one were to truly embrace the idea that life has no meaning and that God does not exist. It has been rightly stated that if God does not exist, all is permissible...

Yes, The Dark Knight is a fictional film. Much like a world without an absolute Moral Law is fictional.

Those who hold to atheism and live a “moral” lifestyle live above the conclusions of their worldview; however, their worldview cannot justify nor sustain their actions. God alone provides us with an Objective Moral Compass.

For Further Reading on The Moral Argument for God, please see:

2) http://www.leaderu.com/offices/billcraig/docs/meta-eth.html- The Indispensability of Theological Meta-Ethical Foundations for Morality by Dr. William Lane Craig
3) http://christiancadre.org/member_contrib/cp_moral.html- Is it Possible to be Good Without God? by Christopher Price
Posted by Chad at 9:51 PM 2 comments:

FYI- Our Second child will be here soon!

Hello everyone! I just wanted to let our readers know that we are expecting our second little girl any day now and to please continue to pray for her health and a safe delivery.

I will do my best to answer emails, comments, and/or questions, however, if it takes a little longer than usual, please know that I will get to it!

Thank you for your prayers and for supporting Truthbomb Apologetics!

Courage and Godspeed,
Chad A. Gross
Posted by Chad at 9:45 PM 1 comment:

William Lane Craig in Christianity Today- God Is Not Dead Yet!

I wanted to draw attention to this month's edition of Christianity Today that features author, debater, and philosopher Dr. William Lane Craig summarizing some of the main arguments for the existence of a theistic God. Craig also explains why many of the modern attacks upon the Christian faith do not reflect an academic position, but are based upon a lack of understanding. Check it out and enjoy!
Click here:
http://www.christianitytoday.com/ct/2008/july/13.22.html- God is not Dead Yet by William Lane Craig
For a recommended reading list for books written on the existence of God, see:
http://www.christianitytoday.com/ct/2008/july/16.24.html
Also, Dr. Craig has released a 3rd edition of his well known book, A Reasonable Faith.
Please see here for details:
http://www.crossway.org/product/9781433501159
Also, to complement the book, Dr. Craig offers a companion site that includes free teaching tools.
See here: http://www.reasonablefaithtools.com/
I hope these resources aid you and encourage you in your search for truth!
Courage and Godspeed,
Chad A. Gross


Many today have fallen victim to the ridiculous assertion that Jesus Christ never existed. While this belief has all but died in academic circles, internet skeptics have attempted to advance this groundless theory.

We offer the following resources to debunk this absurd claim:

3) http://www.answeringinfidels.com/answering-skeptics/others/a-review-of-brian-flemmings-dvd-the-god-who-wasnt-there.html- Apologist Mike Licona destroy's Brian Flemming's movie (and I use that term loosely), The God Who Wasn't There.

6) http://www.christiancadre.org/topics/historicaljesus.html- An exhaustive collection of various works on the historical Jesus.

Courage and Godspeed,
Chad A. Gross
Posted by Chad at 2:22 PM 2 comments:

Logically then, if Hume is correct, claims about anything beyond the physical (including God) should not be believed- because they are meaningless. It is not hard for one to imagine why
Hume himself said:

It is not uncommon to run across an atheist or skeptic who still attempts to invoke Hume’s principles in an effort to render any discussion of God and His existence meaningless.

Nearly two hundred years later, philosopher A.J. Ayer converted Hume’s two conditions into the principle of empirical verifiability (POEV). The POEV claims that a proposition can be meaningful only if it’s true by definition or if it’s empirically verifiable. [1]

Apologist Dr. Norman Geisler provides a story from his college years that demonstrates why the POEV sinks it’s own ship:

“On the first day of that class (Logical Positivism), this professor gave the class the task of giving presentations based on chapters in Ayer’s book Logic, Truth, and Language. I volunteered to do the chapter titled, “The Principle of Empirical Verifiability.” Now keep in mind, this principle was the very foundation of Logical Positivism and thus of the entire course.

At the beginning of the next class, the professor said, “Mr. Geisler, we’ll hear from you first. Keep it to no more than twenty minutes so we can have ample time for discussion…”

I stood up and simply said, “The principle of empirical verifiability states that there are only two kinds of meaningful propositions: 1) those that are true by definition and 2) those that are empirically verifiable. Since the principle of empirical verifiability itself is neither true by definition nor empirically verifiable, it cannot be meaningful. That was it, and I sat down.” [2]

In one sweeping statement, Geisler demonstrated the obvious flaw in the principle; it is self-defeating! The POEV excludes itself because it is neither empirically verifiable nor true by definition.

Obviously, claims that are empirically verifiable or true by definition are meaningful, but they do not encompass all meaningful assertions. The skeptic who continues to invoke the POEV in an effort to explain away the evidence for the existence of God is merely attempting to present a tired objection to avoid critically examining the available data.

The existence of the universe itself, it’s fine-tuning, and the complexity of information within living things alone point to, and even seem to require, the existence of a pre-existing cause outside of nature i.e. God.