“Given Darwinism, even our cognitive faculties must be the result of natural selection. Every aspect of human brain physiology and psychology was entirely fixed by its survival value. This means that nowhere along the human evolutionary path did a concern for truth necessarily come into play. So long as an organism’s cognitive apparatus enables it to stay alive, its beliefs need not be true or even reasonable. There is no necessary connection between the survival potential of a cognitive system and the truth of the beliefs it produces...this means that if naturalism is true, then we have no reason to be confident that any of our beliefs are actually true, and the includes our belief in the truth of naturalism.”
As quoted by James Spiegel in The Making of an Atheist, p. 58-59
Posted by Chad at 9:00 PM 2 comments:

Article: The Moral Argument for God's Existence by Paul Copan

In today's featured article, philosopher Paul Copan provides a version of the Moral Argument for God's Existence.
He argues the following:
1. If objective moral values exist, then God exists.
2. Objective moral values do exist
3. Therefore, God exists.
Copan writes:
"Intrinsically-valuable, thinking persons do not come from impersonal, non-conscious, unguided, valueless processes over time. A personal, self-aware, purposeful, good God provides the natural and necessary context for the existence of valuable, rights-bearing, morally-responsible human persons. That is, personhood and morality are necessarily connected; moral values are rooted in personhood. Without God (a personal Being), no persons - and thus no moral values - would exist at all: no personhood, no moral values. Only if God exists can moral properties be realized."
You can find the rest of the article here.
For a different take on the Moral Argument, see this article by Peter S. Williams.
Courage and Godspeed,
Chad
Posted by Chad at 5:56 PM No comments:

Audio: "A Universe from Nothing" with William Lane Craig 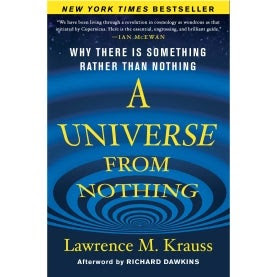 Scientist Lawerence Krauss has recently released his book A Universe from Nothing:Why There is Something Rather than Nothing.
In these podcasts, philosopher William Lane Craig discusses Dr. Krauss's book, his hypothesis and whether or not he is really talking about "nothing" in the literal sense.
You can checkout Part 1 here. Part 2 is here. Part 3 is here.
Further, you can hear Dr. Craig debate Dr. Krauss here.

Courage and Godspeed,
Chad
Posted by Chad at 9:11 PM No comments:

Book Highlights- Walking from East to West:God in the Shadows by Ravi Zacharias

Walking from East to West: God in the Shadows is the written memoirs of Christianity's most well-known international apologist, Dr. Ravi Zacharias.
This book is enjoyable to read from start to finish and reminded me of the need for the apologist to lean on God through prayer.
Some of the highlights I took from the book were:
Ravi's sharing his early vision for ministry and his view on apologetics and the church:
I shared how we envisioned a ministry that would communicate the gospel effectively within the context of the prevailing skepticism. It would seek to reach the thinker and to clear all obstacles in his path so that he or she could see the cross, clearly and unhindered.
"The presuppositions of the majority of this world aren't the same as Christians' presuppositions," I pointed out, "and many of their questions are honest ones." I told them I wanted to address those struggling people-the Thomases of the world-who saw life as not making sense. If the church didn't place true value on a a person's questioning, then we were effectively absolving ourselves of any responsibility to that person. At the same time, if the skeptic's questions weren't honest, we had to address them in ways that exposed his or her dishonesty. Apologetics had to be about much more than answering questions-it had to focus on questioning the questions and clarifying truth claims." [p. 198]
Ravi after sharing a message with a group at the Lenin Military Academy in Moscow:
As soon as I finished the officer shot to his feet and demanded, "All your talk is about God, God, God. What on earth is this you're talking about?"
My response to him was simple. "Sir, are you an atheist?"
"I am"
"If you don't know what it is I'm talking about, then how can you deny it?"
"What do you mean?" [Atheists say that the term "God" is meaningless, yet they don't bother to know what it is they're denying.]
"It doesn't make sense to say you are an atheist," I pointed out, "if you do not know what you are denying."
From there a fascinating discussion ensued, with one young officer standing before the gathering and giving a courageous defense of his faith. "I know Jesus Christ," he stated, "and I know what this man is talking about." He was the lone officer to do so. [p.200]
Ravi meeting one of his heros, Malcolm Muggeridge:
In 1989, as I was speaking in England at a conference, I mentioned that Malcolm Muggeridge was one of my heros and that his books were among my favorites. A man in the audience came to me afterward and said that Muggeridge lived just fifteen miles up the road from where we were. Unable to pass up the opportunity, I got Muggeridge's telephone number and phoned him-and the next day, I was at lunch with Malcolm and Kitty Muggeridge! We spent about three hours together, hours I have treasured since then. What stories he had-from Gandhi to Stalin to the great figures of the mid-twentieth century. That afternoon was a gift from God to my heart. Muggeridge agreed to write the introduction to my book The Real Face of Atheism, but to my great regret, he passed away be my manuscript was complete. He and I exchanged notes on the tragedy of the West as it flirts with atheism but also celebrated the reality that truth has a long reach and will triumph in the end. His encouragement to me was momentous. Meeting him was another reminder that God was at work, putting everything together for me over the years.
Ravi on success:
People sometimes have the illusion that success is the tangible result from a plan or effort put to work, or some material gain accomplished through genius or expertise. I would answer that those things should bring the right kind of enjoyment, but only if you are undergirded in life itself by what is true and of ultimate value. Otherwise, if you are merely a pragmatist, success and possessions bring only the wrong kind of enjoyment.
Ravi on what is ultimately important:
Through all of the visitations of life-successes and failures-it is not how well you are know or not known. It is not how big your organization is or isn't. It is not even how many sermons one has preached or books one has written or millions of dollars one has accumulated. It is how well do you know Jesus? That's it. That is what shapes how you view everything else. Successes are hollow if you do not know the author of life and His purpose. To me, with each passing year, Jesus has only become more beautiful.
Courage and Godspeed,
Chad
Note to Readers: Ravi Zacharias has released a new book entitled Why Jesus?.

Article: Ghosts for the Atheists by Robert Velarde

While doing some research recently I stumbled upon an article entitled Ghosts for the Atheists by Robert Velarde, author of numerous books, including Conversations with C.S. Lewis which is recommended by scholars such as Doug Groothuis and Peter Kreeft.

In the article, Velarde writes:

"In the world of the occult or paranormal, a haunting refers to a recurring manifestation of a ghost, usually at a particular location such as a home or other building. Haunting can also mean to disturb or bother the sensibilities or mind. It is in the second sense that this article will provide “ghosts” for the atheist, not as occult phenomena, but as apologetic arguments intended to nudge atheists from their worldview in the direction of Christian theism by weaving cognitive tensions in the fabric of their view of reality. These tensions can fester, bothering atheists because their worldview becomes haunted by ideas that favor the existence of God."
He goes on to list 10 of these so-called "Ghosts." You can find out what they are here. The PDF is here.
I encourage our readers to check out this excellent article.
After all, I did...because "I ain't afraid of no ghost!" Sorry...I couldn't resist!
Courage and Godspeed,
Chad
Posted by Chad at 9:55 PM 29 comments:

Free E-Book: The End of Infidelity by Jason Engwer and Steve Hays

Jason Engwer and Steve Hays over at Triablogue have written a response to John Loftus' and colleagues latest book The End of Christianity.
You can find the free e-book here.
We have also added it to our Free Online E-book Library.
Courage and Godspeed,
Chad
Posted by Chad at 8:53 PM No comments:

Why I'm Not Worried about Richard Dawkins "Destroying Christianity"

Richard Dawkins has stated that it is his goal to "win" and to "destroy Christianity." However, I'm quite confident that Dawkins will not achieve his lofty goal when one considers that he has so far offered 11 excuses as to why he will not debate Christianity's top defender, Dr William Lane Craig.
Does anyone else miss Christophter Hitchens?
Courage and Godspeed,
Chad
Posted by Chad at 6:41 PM 1 comment:

"The human paradox is that we perceive so many signs of value and significance conveyed to us in our encounter with reality, yet all meaning is threatened by the apparent finality of death. If the universe is truly a cosmos, if the world is really intelligible through and through, then this life by itself cannot be the whole story."
- Belief in God in an Age of Science, p. 23.
Posted by Chad at 8:30 PM No comments: