"The Bible is not for today! Modern problems require modern solutions, not ancient ones."

Someone reading this objection may at first glance think, "What kind of objection is that?" I assure you that it is one that I have heard more than once from those who seek to discredit the Bible and it's relevance.

It’s sufficient here to point out that this objection is based on a bias and not evidence. Meaning, just because something is old, it does not mean it’s unreliable. The question is, “Is the Bible true?” Truth is truth; now, 1,000 years from now, or 10,000 year from now. Truth does not change.
Posted by Chad at 4:01 PM 2 comments:

Greg Koukl and Deepak Chopra on "What is Truth?" 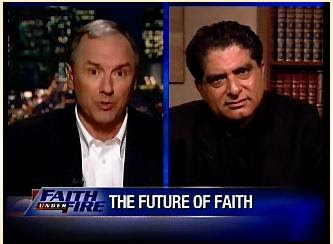 Author Greg Koukl, of Stand to Reason Ministries, in his soon released book, Tactics: A Game Plan for Discussing your Christian Convictions, mentions a debate he once had with author Deepak Chopra on Lee Strobel's Faith Under Fire television show.

The following is a short clip (5:03) of Koukl and Chopra discussing the topics of New Testament dating, the exclusiveness of Christianity, and the nature of religious truth.

Chopra challenges Koukl with the fact that many people believe their religious views are just as true and Koukl does, to which Koukl answers:

"It doesn't matter how fervent a person is, what matters is the reasons he has for believing what he believes."

Courage and Godspeed,
Chad A. Gross
Posted by Chad at 11:50 AM No comments:

We live in a slogan society. Groundless assertions are routinely proclaimed publicly and counted as gospel truths and to often go unchallenged by those within earshot.

From the evening news, to the local paper, to the media named New Atheists, statements such as:


are boldly preached and have become authoritative dogma in many popular circles. Tragically, truth no longer seems to matter.

While the death of truth in our culture has been tragic enough, equally as heartbreaking is the lack of intelligent answers being given by those who claim to follow Jesus Christ, the very one who claimed to be the Truth (John 14:6).

Author Greg Koukl, in his new book, Tactics:A Game Plan for Discussing your Christian Convictions, seeks to equip believers with thoughtful responses to common objections and offers a challenge to those who claim to be Christians- become an ambassador for Jesus Christ.

The majority of the book focuses on the second skill, an artful method for sharing the truth with unbelievers and questioners.

Koukl is obviously a seasoned veteran when it comes to debate and intellectual conversation. Throughout the book, he draws on his personal experiences which range from conversations with waitresses to televised debates. Regardless of the setting, the reader gains a massive amount of wisdom and logic from these interactions.

Koukl is careful to explain that the tactics he presents in the book are not for manipulation, but to aid you in staying in the driver's seat while discussing your spiritual convictions.

After challenging some common objections to apologetics and pointing out that arguing can actually be a virtue, Koukl begins to educate the reader on what he calls the “queen mother of all tactics,” the Columbo Method, named after Lieutenant Columbo, brilliant TV detective.

“The key to the Columbo tactic is to go on the offensive in an inoffensive way by using carefully selected questions to productively advance the conversation.” [2]

The strength of the Columbo tactic is that anyone can learn to do it and with practice become a fairly confident communicator of the gospel.

Upon spending the first half of the book explaining the “queen mother,” Koukl turns his focus to a virtual arsenal of other tactics such as:

This tactic explains how to identify and respond to self-defeating statements such as, "There is no such thing as truth." (Is that statement true then?)

Here, the reader learns how to identify and respond to an idea that seems to logically make sense, but self-destructs when practically applied.

Have you ever been in a conversation with someone who constantly interrupts you when you are trying to explain your position? Koukl explains how to handle the "steamroller."

I was astounded at the amount of familiar objections Koukl was able to challenge in a very factual, logical, and respectful manner.

Throughout the book, he demolishes numerous popular statements that are often vocalized without any evidence to sustain themselves. Abortion, biblical authority, and homosexuality are just a few examples. The reader can’t help but to be challenged and encouraged by his razor sharp logic and practical methods.

Koukl's heart throughout the book is to reach unbelievers with the gospel in a respectful, but thoughtful manner, realizing that it's ultimately God's job to change hearts.
However, don't be misled, Tactics is not just another book about sharing your faith, but stands distinct among it's peers. Koukl's unique methods, clear approach, and easy to apply ideas make Tactics: A Game Plan for Discussing your Christian Convictions a must have for any thoughtful Christian's library.

This work boasts recommendations from some of the best in Christian apologetics today. Norman Geisler, William Lane Craig, J.P. Moreland, Gary Habermas, and Paul Copan are just a few and I echo there gleaming reviews.

If you are a Christian, buy this book! You will come away with a wonderful collection of thoughtful points and airtight arguments to share with those who have questions about Jesus and His life saving message.

I am gratefully to Zondervan for the opportunity to review this fine book.

Apologist Frank Turek, co-author of the book I Don't Enough Faith to be an Atheist, is bringing his seminar, called by that same name, to the Frederick, Maryland Area in February.

The information is as follows:

If you are a member of Faith Christian Fellowship or in the area and interested in attending Dr. Turek's seminar, please email me at djspidey67@yahoo.com. Truthbomb is interested in taking a group to the presentations.

Dr. Turek has debated Christopher Hitchens and is president of Cross-Examined Ministries, geared toward educating high school and college aged Christians about the truths of Christianity.

Courage and Godspeed,
Chad A. Gross
Posted by Chad at 11:01 AM No comments:

The Historical Reliability of the Gospels by Craig Blomberg The Apologetics Study Bible, which you can learn about here, contains numerous features including:


3. Biographies of notable Christian apologists from the past such as C.S. Lewis, William Paley, and Thomas Aquinas.

It is David A. Horner's biography of Thomas Aquinas that offers us a glimpse of the attitude the follower of Jesus Christ should have when addressing someone with different beliefs.

"Thomas Aquinas (1225-11274), one of the most influential thinkers of all time, was a medieval theologian, philosopher, professor, priest, poet, adviser to popes and kings- and apologist...in his writing Aquinas considered some 10,000 objections against his own position. He knew what others believed and why they believed it, especially the most influential views of his day. He treated these other positions accurately and fairly, and he responded with gracious but rigorous reasoning and argument. Above all he was interested in truth. (In this regard he appealed to Pr 27:17, saying that "iron sharpens iron.") He had no room for apologetic arguments that used cheap shots, caricatures, or shoddy reasoning, which are unfair and unloving to people and do not serve the truth." [1; Emphasis mine]

Just wanted to inform you of a few noteworthy debates that are forthcoming...

1) Dr. William Lane Craig will debate atheist Christopher Hitchens on the topic of Does God Exist? on April 4, 2009.

Courage and Godspeed,
Chad A. Gross
Posted by Chad at 3:38 PM 4 comments:

In his article, Rediscovering Apologetics, philosopher and Christian apologist Paul Copan explains why followers of Christ should be equipped to answers questions about what they believe, why pastors should preach apologetic sermons, and how our young people need to be taught how to engage ideas thoughtfully.

"... with some guidance, and armed with the knowledge that their faith can withstand intellectual scrutiny, Christians can converse engagingly with doubters and skeptics."

Courage and Godspeed,
Chad A. Gross
Posted by Chad at 3:17 PM 2 comments: