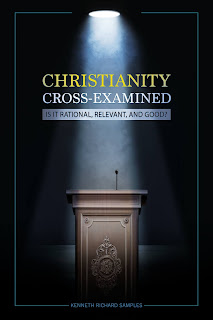 In our recent interview with philosopher and theologian Ken Samples of Reasons to Believe, we grappled with the question of slavery and the Bible.

Obviously, there is much that can be said about this topic, but one point that Samples made is that the servant-slavery that we read about in the Bible is not the same type of chattel slavery that was witnessed in the Antebellum South or the slave trade in William Wilberforce's Britain.

In his new book Christianity Cross-Examined: Is It Rational, Relevant, and Good?, Samples shares ten ways servant-slavery in Israel differed from chattel slavery.

1. Indentured servitude offered a means to deal with poverty.
2. Racism was not a motivation for slavery.
3. Kidnapping, including for the purpose of slave trading, was illegal.
4. Enslaved people were not treated as mere property.
5. Cruelty was strictly prohibited and punishable by law.
6. Slavery was not operative from birth.
7. Slavery was not a permanent condition.
8. Indentured servitude was entered into and ended voluntarily.
9. Enslaved people had rights.
10. Enslaved people had access to an appeals process.

For those who are interested in learning more about this topic, Samples further explores the topic of slavery in the ancient world in his new book.

You can get your copy here.

Investigating Slavery in the Bible

Article: How to ERASE Logical Fallacies by Kenneth Samples

Skeptical Philosopher Paul Draper on the Existence of Beauty 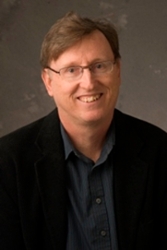 "Theism is supported by the fact that the universe contains an abundance of beauty...A beautiful universe, especially one containing beings that can appreciate that beauty, is clearly more likely on theism than on naturalism."[1]

How was Jesus’ death a real sacrifice if He knew He would be resurrected?

I recently saw the image below on social media- 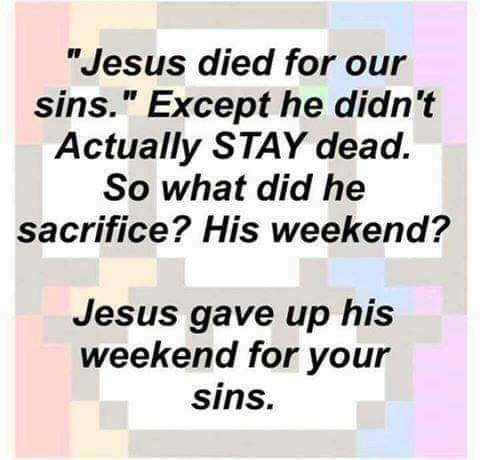 The source for a response to this statement comes from got.questions.org and is provided below-

Christianity teaches that God, in human form, lowered Himself to being humiliated and murdered by His own creations. That sacrificial death opened a path to salvation for anyone and everyone who trusts in Jesus Christ. Christ went to death knowingly (Mark 8:31), with full understanding that He would suffer on a cross and that He would be raised from death (Luke 24:46). Since Jesus knew the eventual outcome, some question whether this was a real sacrifice. Was Jesus’ death on the cross truly sacrificial, if Jesus was guaranteed to be raised from death?Those who doubt that Jesus’ death was a real sacrifice misunderstand what happened on that cross. Christ’s sacrifice was not entirely about ending the life of His human body. In truth, what happened on the cross involved more than stopping a heartbeat. The sacrifice of Christ also came in His emotional suffering (Isaiah 53) and in an omnipotent, perfect God being tortured and humiliated by His own creations (Philippians 2:6–8). There’s powerful and important symbolism in the physical aspects of Christ’s death and resurrection, as well as a fulfillment of prophecy. But there is more to the sacrifice of Christ than “merely” the death and resurrection of a physical body, as monumental as those events were.Physical restoration does not make prior events any less sacrificial or traumatic. Simply knowing that something good is coming after the bad does not make the bad any less painful. A child knowing he will get ice cream after his tonsillectomy does not make the surgery and its aftermath any less harrowing and uncomfortable. Seeking peace, a strong man might allow a bully to spit on him and throw food in his face. The body and clothes can be easily cleaned, but that doesn’t at all change the experience of indignity and shame. We don’t dismiss the sacrifice of families of military veterans simply because their loved ones made it home. Victims of sexual assault may experience physical healing, but that’s not nearly the worst damage they’ve experienced.Jesus Himself used the analogy of a woman in childbirth to illustrate the anguish the disciples would experience at His death (John 16:20–22). He reassured the disciples that their sorrow would be turned to joy; the ultimate outcome was worth temporary suffering. Just as a woman who gives birth is more invested in joy over her newborn child than looking back at the pain of giving birth, the disciples would be focused on the joy of Christ’s resurrection, despite their prior pain. Of course—as many mothers will attest—the joy of childbirth doesn’t disaffirm the pain and suffering involved in the birth. Only an extremely foolish child would dismiss a mother’s birth pains by saying, “So what? You got over it, and you got me!” The mother’s agony was real, and that reality exists even for mothers who are entirely confident that the birthing process will end in joy and health.Enduring even momentary insults, indignity, and disrespect is a sacrifice in and of itself. This is true when the victims are finite, sinful humans, and the sacrifice is amplified when the victim is the perfect and sinless Son of God. Added to the emotional pain caused by injustice was the physical pain, something that can be overcome but not undone. The cross was truly sacrificial because Jesus experienced it in the same way as any other human being would—even though He was not obligated to be there and He did not deserve to be there.When Christ came to earth, He experienced everything human beings normally do. This included the physical (Matthew 4:2; John 4:6), spiritual (Hebrews 4:15), and emotional (Matthew 26:37–39; John 11:33–35) aspects of humanity. Jesus suffered the same physical and mental anguish as any one of us would in the scourging and crucifixion. The brutality of His death was not an easy thing; the cross was not trivial to Christ simply because He knew He was going to be resurrected. The gospel promises all believers will be resurrected (John 11:24; Acts 24:15; Revelation 20:6). That promise doesn’t make the expense of one’s earthly life any less meaningful or sacrificial (John 15:13).When Jesus arrived at the tomb of Lazarus, He wept (John 11:35). Even though He had come to Bethany knowing He would resurrect His friend (John 11:11–15), Jesus still expressed sorrow for the pain and suffering the situation had caused. Scripture speaks of God wiping our tears away in eternity (Revelation 21:4), not giving us amnesia. All things will be made right (Romans 8:28), and all things will be made new (Revelation 21:5), but God never suggests that what we experience or feel along the way is irrelevant. Knowing that goodness and restoration await us offers us great resolve in the face of suffering (Hebrews 12:2; Philippians 2:8–9), but hope doesn’t reduce the pain or deflect the injuries.The death of Christ was about atonement for sin, and the infinite sacrifice of God lowering Himself accomplished that atonement. Jesus knew what awaited Him—both in pain and in glory—but this knowledge did not lessen His suffering. He was just as much emotionally wrought, wrestling with His options (Mark 14:36), and His body was just as much broken and disfigured (Psalm 22:14–18) as if He were not the God-Man. Jesus’ humanity recoiled at the thought of suffering on the cross, but He sacrificed His will to the Father’s (Luke 22:42). At any moment, He could have called down heavenly help, but He sacrificed His rights in order to provide us salvation (Matthew 26:53).

God Bless,
Posted by The Other Chad at 9:10 AM No comments: