A Christian Response to the latest Noah's Ark find...

A stir is beginning to develop regarding a claim made by a team of Chinese and Turkey evangelists that they have found Noah's Ark.

"It's not 100 percent that it is Noah's Ark but we think it is 99.9 percent that this is it," Yeung Wing-cheung, a Hong Kong documentary filmmaker and a member of Noah Ark's Ministries International(NAMI) team of 15.


For those interested, you can read the entire story here. I also recommend visiting NAMI's website for detailed look at the claims.

Now, why do I draw attention to this claim? Some may pre-suppose that I have already concluded that the Ark itself has been found and that we must proclaim it to the world. However, my intent in this post is quite different. It is my conviction that we, as followers of Christ, must be careful with such claims and practice discernment.

Since becoming a follower of Christ there have been numerous archaeological finds that I have read about that have encouraged me in my faith. However, there have also been those claims that have proven to be false, but yet still seem to survive, especially on the Internet, as actual.

Christianity, of course, is not alone in such false claims, especially when one recalls such claims from the scientific community as Piltdown Man or, even more recently, the "missing link" Ida. We must be careful to weigh the evidence for such lofty claims before endorsing them as fact.


So, how should the follower of Christ respond to the recent claims that Noah's Ark has been found?

I suggest the following-

As the story continues to unfold, remember: "But examine everything carefully; hold fast to that which is good;" (1 Thess. 5:21).

Courage and Godspeed,
Chad
Posted by Chad at 9:00 PM 2 comments:

New Testament Scholar Craig A. Evans is just one of the numerous scholars featured in this 8 part video that chronicles their search to unearth the evidence for the Jesus Christ of history.

Was Jesus really the Son of God and the Messiah the Bible claims, or was He merely human like the rest of us? For the last 10 years, a group of scholars have been studying this very issue. Watch as they put forth their evidence, and then decide for yourself who Jesus really was.

The 8 parts (26 minutes each) are available to watch online and are as follows:

8. Jesus: Man, Messiah, or More? The Resurrection of Jesus, Pt 8

The 8 part-DVD is available for purchase here. 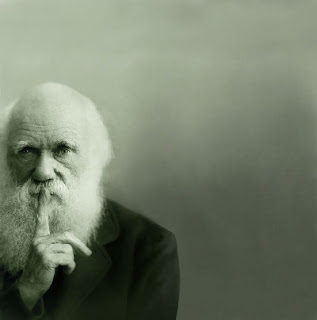 Let me start off by saying that as a follow of Jesus Christ, Darwinism and the evidence for it, does not scare me in the least. Even if evolution were proven to be true, it would not logically follow that the Christian God does not exist.

That being said, a common phrase repeated by advocates of Darwinian evolution is Dobzhansky's claim that "nothing in biology makes sense except in the light of evolution."

With that in mind, does the following information seem, um... thought-provoking to anyone other than myself?

With this information in mind, does that mean that the men who pioneered most of the fundamental disciplines in modern biology could not "make sense" of it?

Just something to think about...

To read an excerpt from the book, click here.

Essay: The Cumulative Case for Christianity by Chad Gross 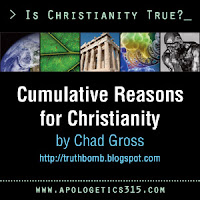 For those interested, here is my essay, featured today on Apologetics315, entitled The Cumulative Case for Christianity.

Thus far, the essays have been excellent and I am grateful to be included in the project.

Please visit Apologetics315 and check out all the essays.

Courage and Godspeed,
Chad
Posted by Chad at 8:26 PM 3 comments:

The essays in the series thus far have been excellent. I encourage our readers to follow this series and join the interactions!

Thanks to Brian at Apologetics315 for the opportunity!

Courage and Godspeed,
Chad
Posted by Chad at 9:58 PM No comments:

In this brief article, apologist Greg Koukl explains why you should NEVER READ A BIBLE VERSE! Koukl highlights the importance of reading Bible verses in their context and even addresses some often quoted sayings that many of you have probably heard fellow believers misuse such as:

You can checkout the article here.

To further familiarize yourself with Koukl's work, see Stand to Reason's website here.

I wanted to wish everyone a happy Resurrection Day! For those who are looking for some resources dealing with the historicity of the resurrection, please see this post we did a few months back entitled Resurrection Research Links. This post features articles, audio, debates, and videos of top scholars such as William Lane Craig, Mike Licona, Gary Habermas, and more!

Courage and Godspeed,
Chad
Posted by Chad at 6:14 PM 1 comment: