Counterpoints: John Loftus and Frank Turek on the Death of Christopher Hitchens 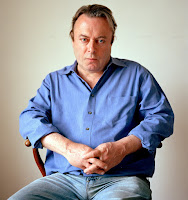 John Loftus: "Many Christians are thinking he’s burning in hell. Some others may even say this. But it is a disgrace to humanity to even think this abhorrent thought about such a brilliantly good man...this statement burns me up to no end. It is more repulsive than any thought I can conceive...may his memory live on. He has changed the world for the better." [1]

Frank Turek: "There is no one with whom I disagreed more who I admired so much. I don’t see how anyone who knew Christopher Hitchens could think that a man with such admirable qualities and talents was nothing more than a collection of chemicals– the product of unexplained random processes. Christopher’s intellect, wit, courage, and passion are evidence to me of a Divine Being– a Divine Being who loves human freedom so much that He would even allow the gifts He bestows to be used against Him." [2]

Although I disagreed with many of Hitchens' views, I did admire his willingness to take on all comers and his story telling abilities. The goal of this post is simply to contrast the views of a Christian and an atheist on the death of a well-known individual. No disrespect toward Mr. Hitchens or his family is intended.

For those who do not receive Lee Strobel's monthly newsletter, I would strongly encourage you to consider signing up for it here. I have been very pleased with the content in the letters since signing up.

In this month's newsletter, Strobel tackles some relevant Bible questions and includes some excellent resources for the Christmas season.

Lee answers the questions- 1) When was Luke written? 2) Why is a Verse Missing in Matthew?- and you can find his responses here.

Courage and Godspeed,
Chad
Posted by Chad at 9:19 PM No comments:

2. World Religion or a Cult?

4. What Do Mormons Believe?

For more of Dr. Richard Howe's work, go here.
For more resources on Mormonism check out our Apologetics Arsenal.

Enjoy!
Courage and Godspeed,
Chad
Posted by Chad at 12:05 AM No comments:

Article: What is the Truth About the Date and Origin of Christmas? by Jim Wallace

The forthcoming holiday season provides followers of Christ with an excellent opportunity to share the gospel with friends and family.
Here at Truthbomb Apologetics, we desire to equip you to intelligently and winsomely discuss the evidences for Christianity with precision and grace.
Last year, we offered this post that boasts numerous Christmas Research Materials.
In this post, we feature an excellent article by Jim Wallace of PleaseConvinceMe.com that addresses the questions:
You can checkout the article here.
Courage and Godspeed,
Chad
Posted by Chad at 10:11 PM No comments: