The Magic Wand of Evolution

The Christian theist is often accused of arguing for the “God of the Gaps” when invoking God as an explanation. It’s important to understand that this is actually a complete misrepresentation of what the theist should be arguing. Theists such as William Lane Craig and Stephen Meyer argue by using a method that scientists and philosophers call “inference to the best explanation,” also known as the method of competing hypothesis. Briefly summarizing, this is when competing explanations are weighted and the one that best explains the relevant data is considered to be the correct one. One of the main reasons I prefer arguing for the best explanation is preciously because I believe it helps eliminate gap-type arguments.  For more on inference to the best explanation, see here.

However, as of late, it seems that in my reading, personal discussions and blogging, I have experienced another gap-type argument that I have dubbed “The Magic Wand of Evolution.”  This is when a challenge is brought before a skeptic or atheist and they simply reply “evolution” or “I believe evolution created….” And POOF! Somehow, in their minds, they have magically provided a satisfying explanation to the problem at hand. How do you explain the existence of objective moral values? Why, evolution of course. How do you explain how we got life from non-life? [1]  Evolution my good man! How do you account for the vast complexity we find in living things? Evolution! Ta-Da! [2] From my recent experiences, it seems that proponents of neo-Darwinian evolution find this to be a fulfilling answer to such difficult questions. It’s just that easy friend.

In reality, this is no type of explanation at all. This is merely an assertion and an assertion does not equal an argument. It seems that the atheist cries foul whenever the theist defends God as an explanation for a known body of data or problem; however, many of them [not all] are quick to assert "The Magic Wand of Evolution" as an explanation and seem to be under the impression that this somehow provides an adequate, intellectually satisfying answer.

In closing, I believe it’s important for the wizards who wield their wands to understand that in invoking the "The Magic Wand of Evolution" they have explained nothing and until they provide an actual argument for their proposed explanation we theists are under no obligation to take their assertion seriously.

Footnotes:
1. I realize that this is the process of abiogenesis; however, this was an explanation offered to me in a conversation with an atheist.  When I asked how he believed we got the first life, he responded by attempting to describe an evolutionary type process.
2. A perfect example of this is in Richard Dawkins’ book, The God Delusion.
Posted by Chad at 1:50 PM 7 comments:

Essay: How to Get Apologetics in Your Church- A Call to Action by Chad A. Gross 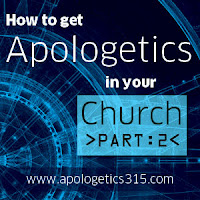 Apologist Brian Auten over at Apologetics315 has been featuring a series of essays entitled, "How to Get Apologetics in Your Church 2."

I had the privilege of contributing to this excellent series and you can read my essay here.

You can find the first series here.  Our contribution to that series can be found here.

You may also want to check out 23 Essays Exploring the Truth of Christianity.

Many thanks to Brian Auten for the opportunity!

Featured Article: If God made the Universe, Who made God? by Paul Copan

The age old child's question, "Who made God?" has gained some ground within atheist circles.  In my estimation, this is due to the somewhat recent rise of the media named "new atheists."

Indeed, many popular thinkers seem to think that the question, "Who designed the designer?" is an insurmountable challenge for the Christian theist.

In this featured article, philosopher Paul Copan answers the question, "If God made the universe, who made God?"

Courage and Godspeed,
Chad
Posted by Chad at 12:20 AM No comments:

In Richard Dawkins's book The God Delusion he demonstrates his ineptness in dealing with the ancient texts.


However, David Marshall, in this book The Truth Behind the New Atheism, explains the fatal problem with this claim:


"Jefferson was a talented man...But Jefferson did not, I think, claim the gift of prophecy.  That would have been required for him to refer to Thomas, Mary or Philip, which were lost in the Egyptian desert at the time Jefferson allegedly recommended them to his nephew." [2] 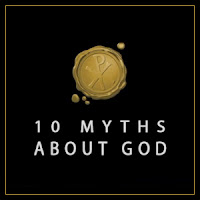 Apologetics315 has featured 10 short videos featuring Michael Patton and Tim Kimberley that deal with 10 of the most common myths about God.


They are as follows:


Enjoy and checkout Apologetics315 here.  It's a great place for learning and discussion!

Featured Resource: Every Student- A Safe Place to Ask Questions about God

EveryStudent.com is a great place for high school and college aged students to visit and seek answers to their questions about God, Jesus and their Christian faith.

There are resources that pertain to:

You can check out this great resource here.

In this 3 part video, J.P. Moreland presents "The Evidence for Christianity." This talk surveys some of the evidences for Christianity in light of the attacks in recent years from the new atheism.


They strive to "demonstrate that the Christian faith is rooted in sound evidence and reason. We also seek to encourage other Christians here in the UK to be good ambassadors (2 Cor 5:20) and challenge them to present the Gospel persuasively, passionately and gracefully."


This is an excellent blog that we encourage readers to check out!

In this featured article, apologist Phil Fernandes argues for the reliability of the Old Testament.

Audio and video resources are here.